Brief Introduction：A concentrator with a central hydraulic motor drive and a hydraulic automatic rake.
Volume: 25~7853 ㎡
Application : It is mainly used for clarification and concentration of pulp in order to achieve the purpose of dehydration. It can also be used in chemical and metallurgical industries to carry out the dehydration of solid-liquid separation.
Product Improvement：The maximum inside diameter can be up to 100M.

1.increase the degassing tank, to avoid solid particles attached to the bubble, like the "parachute" settlement phenomenon.

2. The feeding tube is located below the level of the liquid to prevent the gas from entering.

3. the feed well is moved down, and the feed plate is set up to make the pulp even and smoothly fall, effectively preventing the phenomenon of overturning caused by the residual pressure of the ore.

4. the internal overflow weir is added to make the material flow according to the prescribed stroke, so as to prevent the "short circuit" phenomenon.

5. The overflow weir is changed into sawtooth, which improves the suction phenomenon of local drainage due to the non level of overflow weir.

6. will be changed by slash tooth alignment curve, so that the pulp not only to the center of harrow, but also a center to "backlog" force to discharge the underflow concentration is high, thus increasing the processing ability. 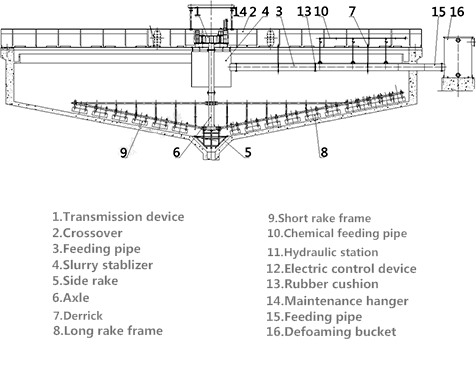